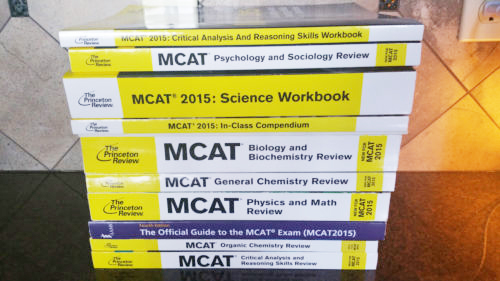 We've seen that the MCAT is a decent predictor of who's an academic risk and who isn't.

But just because you can succeed in med school with a 27 MCA, it doesn't mean you will get in with a 27.  Here's why:

Med schools don't just use the MCAT to see who's an academic risk.  They use it for bragging rights.  The schools with the highest average MCAT scores are perceived to be the best.  Not just among pre-meds (who, as a group, can be obsessed with going to the best school that they can).  Med schools use it to measure themselves against their competition.  Who's their competition?  Other medical schools.

The US News and World Report publishes a list of the Best Medical Schools every year.  Actually, they publish two lists with slightly differing methodologies - the schools that are best for primary care and those that are best in research.  But no matter the list, the MCAT plays a huge role:

The MCAT is responsible for 13% of the research ranking list and 9.75% of the primary care ranking.  While those percentages are not important, it is important to notice that the MCAT is one of the few rankings that are under the control of the admissions office.  The other factors - such as the opinion of the school as held by other medical schools and the student-faculty ratio - are much harder to change.

It's not enough, then, to have an MCAT score that is good enough to prove you can make it through medical school.  The higher your MCAT score, the more you boost the school's US News Ranking, and the more bragging rights the med school has.

The acceptance data back that up.  According to data from the AAMC, only 39% of applicants with a 27-29 get in to allopathic medical school. https://www.aamc.org/download/321508/data/factstable24.pdf

Keep in mind that this data includes EVERYONE.  So, as an example, it includes the acceptance rates for the Puerto Rican medical schools, who admit a huge number of students for whom English is not their first language, and who consequently don't score as well on the MCAT (the average MCAT scores at the Puerto Rican schools range from 21 to 25).  It includes scores for, say, students who live in North Dakota, where the lack of doctors is so stark that the medical school will regularly accept students with MCATs in the low 20's (admittedly, they don't accept many of these students).

The acceptance data support the fact that the higher your MCAT score, the better.

So if your MCAT is lower than the school's average, you will hurt their US News Ranking.  And while that doesn't make it impossible to get in, it does mean you have to have a compelling reason that you would benefit the school in other areas.  You might be someone who will be a part of the school's pet primary care program, for example.  Or maybe you have a perfect 4.0 that helps raise the school's average GPA.  Whatever the reason, you will have to be a standout applicant in all other respects in order to get into a school while being too far below their average MCAT.