How to convert Old MCAT Scores to new (and vice versa) 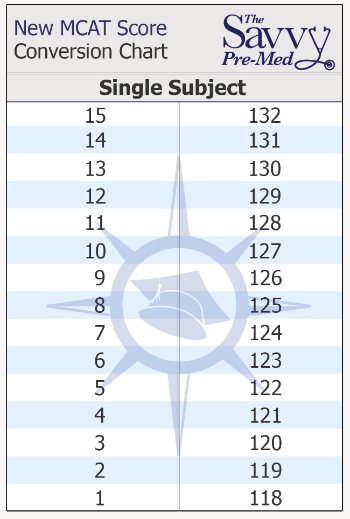 The scoring on the new MCAT is dumb.  It's as if AAMC was trying to make it as hard as possible to do the math in our heads.  Though they didn't include fractions or imaginary numbers, they chose some arbitrary numbers.

Here are the numbers according to AAMC:

If you pay close attention, the new MCAT sections are just the old MCAT in disguise.  Both have a range of 15 (from 1-15 on the old scale, and from 118 to 132 on the new).  The disguise is merely that 117 points that have been added to make the new MCAT scores more annoying to work with.  And because both are scaled scores - meaning that the AAMC takes the range of scores from each administration and adjusts it for the 1-15 scale for each subject - the scales should end up looking almost exactly the same.

But of course, this is just an estimate of the new scales - take these with a healthy grain of salt.

So without further ado, here are our charts comparing old scores and new:

I would imagine that the AAMC is not particularly pleased with this chart.  You see, they argue that the new MCAT scores should not be equated to the old MCAT scores:

This is mostly false.  The bulk of the two exams are the same (there's bio, ochem, gchem, physics, and verbal on both).  And as any good MCAT teacher will tell you, the MCAT is just as much about your ability to take the test than it is your knowledge of the content of the test.  The main thing both the old and new MCAT measure is how well you test.

But the AAMC is not done.  They argue that admissions committees should not compare the two scores:

This is a noble sentiment.  It's saying that past students with at least an 8 or 9 on each section of their MCAT have indeed succeeded in medical school and beyond.

But while it is a noble sentiment, this research has been out for 7 years, and med schools have yet to focus on the applicants at the center of the scale.

Plus, the MCAT represents more than simply who will do well in medical school; it's also used in the US News and World Report Rankings.  In other words, medical schools are incentivized to get these scores as high as possible.

So as long as the MCAT is used for other purposes than figuring out who will succeed in med school (i.e. used in admissions), then medical schools will continue to see MCAT scores as, “the higher the better.”  As a result, the MCAT will do what it’s always done: help decide which applicants should be admitted and which should not.  And in that sense, it’s not changing at all.