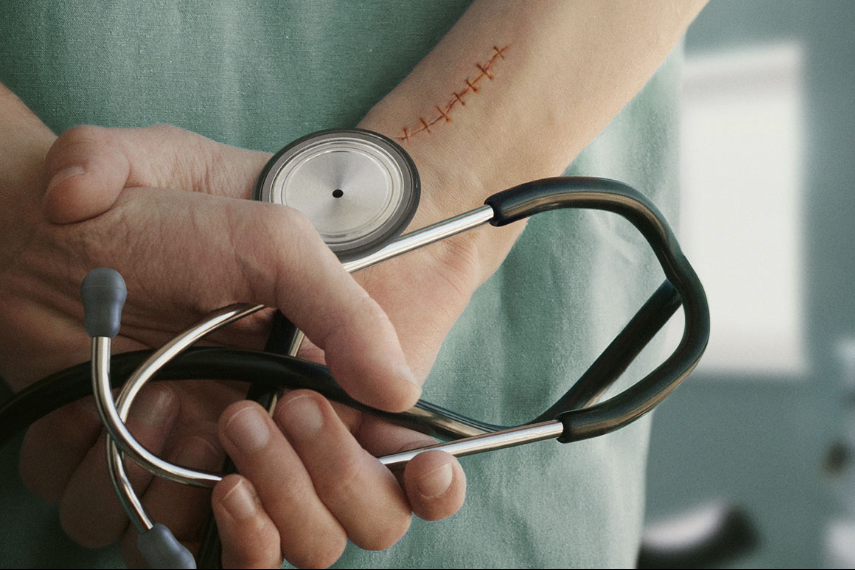 Warning: This article contains sensitive material, so read at your discretion. If you or someone you know is struggling with mental health or suicidal thoughts, call this free 24/7 hotline. National Suicide Prevention Lifeline: 1-800-273-8255

Your child - the star of the family - has finally made it into medical school, realizing a lifelong dream. Along the way, he got straight A's, volunteered long hours in the community, aced the MCAT and even had a little fun along the way. He’s every parent’s dream.

And then you get the phone call from the police: three weeks before medical school graduation, you learn that your child shot himself. Beyond the heartbreak of any young person's death lies a question. Why? Your child was mere moments away from fulfilling his dream. And yet.

The story we describe is real, a scene from a new documentary, Do No Harm. The director, Robyn Simon, was kind enough to grant Savvy Pre-Med an interview. In the scene described, parents watch their son's medical school graduation on television, three weeks after he died. "I never thought this would be the way we'd be watching my son's graduation," she says, asking the question "why" without using the word.

SUICIDE CAN HAPPEN TO ANY PRE-MED OR MEDICAL STUDENT

It's easy to think, “this will never happen to my child. My child is well adjusted.” The reality, though, is that it can happen to anyone.

In fact, the false sense of security, the idea that this is something that “happens to other people,” often contributes to the problem. In a recent interview with The Savvy Pre-Med, filmmaker Robyn Symon discussed this topic in regards to her documentary Do No Harm:

“In the film, you’ll see and hear about medical students at the top of their class who took their lives. Nobody knew they were struggling, not even family and close friends. Sometimes, the smartest ones (also the most caring ones) feel the pressure of the expectations on them, their family, their friends, and their community. It’s important to realize, ‘this is incredibly tough.’ Our best and brightest are vulnerable.”

You can see how this problem creates a vicious cycle. Pre-meds, medical students, and doctors need help, but the pressure they feel to be perfect and invulnerable makes them hide their feelings. And due to the need to uphold a certain image, they will go to great lengths to mask the situation and keep it vaulted as a dark, private secret. The suppression, the festering of these emotions, can often be the tipping point.

It is scary to think that everything could seem fine on the surface, but in reality be the furthest thing from ‘fine.’ If it can happen to anyone, with no clear visible signs, then how do you prevent it?

JUST HOW COMMON IS SUICIDE AMONG MEDICAL STUDENTS?

There are no studies on pre-med suicide that we could find. Collecting data on the subject is difficult. Often families do not want the world to know about the suicide, preferring to leave the cause of death "unknown."

However, there is some data being gathered on physician suicides in general. On Pamela Wible MD, you can read about Dr. Wible’s registry, which contains 1,013 reported accounts since she began collecting them in 2013. According to research from physicians Louise B. Andrew and Barry E. Brenner, four hundred physicians are lost to suicide every year, but this has also been suggested to be an underestimation.

Dr. Wible highlights a few specific cases that were allegedly swept under the rug, like medical student Ari Frosch. According to Wible, Frosch stood in front of a train, but his school reported that he died at home with his family.

Until the attitudes and stigma change surrounding this topic, it will be hard to accurately gauge its prevalence. But in short - it seems more common than people would imagine.

WHAT CAN PARENTS DO TO HELP PREVENT PRE-MED SUICIDE?

Some parents have the pleasure of seeing their pre-med and medical student children on a semi-regular basis if they attend a nearby school. But for most, their son or daughter is far away, perhaps thousands of miles across the country. This distance makes it even more challenging to detect problems or intervene appropriately.

In either case, we’ve tried to compile some advice for concerned parents. These tips are based on our (admittedly) limited research and our experience working with pre-meds.

1. REDEFINE EXPECTATIONS IN A HEALTHIER WAY

Pre-meds often define their self-worth based on results, so they feel immense pressure to excel and view failure as a condemnation. They frequently compare themselves to their peers and seek the affirmation of others.

Your best bet as a parent is to avoid exacerbating this feeling. It’s tempting to push your pre-med children as a way to motivate them and help them stay on task. But this can add another stressor and authority figure for them to appease, when ideally you should be their primary confidant and support system.

Tell your pre-med children that you love them and are proud of them, regardless of what happens with their medical aspirations. Acknowledge the difficulty and admirability of their goals. Make the “expectations” as unconditional as possible. It’s dangerous if they believe that your love or appreciation for them hinges on their MD degree or level of accomplishment or status. So take the time to clear the air with them, even if it feels a bit awkward.

Robyn Symon expounded on this idea during her interview with The Savvy Pre-Med:

“Many parents think: ‘our child is an adult; we don't want to get him or her in trouble. What are we going to do, call the dean?’ But the most important thing is open communication. Talk about the pressures, agree to speak openly about it with each other. Parents can talk to administrators or the dean to address problems that exist. Acknowledge that it's a profession where sometimes the most brilliant and caring succumb to disillusionment. Communication is needed to destigmatize.”

2. MAKE SURE THEY HAVE A “BUDDY” (OR CONFIDANT)

This might sound like a rule at summer camp, but this concept holds true throughout our entire lives. Everyone needs someone close by that he or she can turn to.

When talking with your pre-med or medical student children, whether they’re 30 minutes away or halfway across the country, try to gauge the extent of their social lives and whether they have friends that they regularly see and hang out with. Even just one close friend is enough. These buddies don’t need to be other pre-meds or medical students; they just need to people your children are comfortable around and can trust.

Even though YOU want to be their primary resource, you won’t always be able to. Without being intrusive, take any opportunity that presents itself to meet their friends and establish some kind of contact. You never know when this relationship could turn out to be a difference maker.

3. ENCOURAGE BALANCE IN THEIR LIVES

Having buddies can significantly help your pre-med or medical student children achieve balance. But that’s only part of the equation.

Instead of checking in on your children’s grades and classes, ask them what they made for dinner and if they’re getting enough exercise. Ask about their hobbies and weekend plans. Odds are, they’ll already be obsessed with their academics, research projects, etc., so do them a favor and help them stay accountable for their own well-being. Encourage them to take full days off so that they can recharge and stay on top of wellness, organization, hygiene, sleep, and all those other small forms of self-care.

Don’t make them feel guilty for “wasting time” on social events or fun activities. They have likely already trained themselves to feel bad about indulgences and diversions; as their parents, you should avoid contributing to this “pre-med guilt” so that they don’t feel trapped or stifled.

You don’t want your children to “go it alone,” and you shouldn’t either. If you’re concerned about your pre-med or medical student children, seek help. There are many resources available for concerned family members who need advice or counseling about how to approach their loved ones.

As parents, it’s tough to admit that you need help, since in theory you should be the #1 authority on your children, but don’t feel like you need to be your children’s psychologist, therapist, life coach, and care provider all wrapped into one.

Find parents like you. No matter how alone you may feel, suicidal ideation and attempts aren’t rare. The Jason Foundation’s parent resource program indicates that suicide is the second leading cause of death in children age 10-24 years old. To get support, parents frequently need to look outside of their usual networks and find other parents in the same boat. Local YMCA chapters have support groups for parents located throughout the country. The National Alliance on Mental Illness (NAMI) can also connect parents with support groups in their area. For parents who don’t live near in-person support groups or don’t feel comfortable going to them, they can utilize DBSA’s Balanced Mind Parents Network, an online community.