Which States’ Pre-Meds Have the Highest Acceptance Rates? 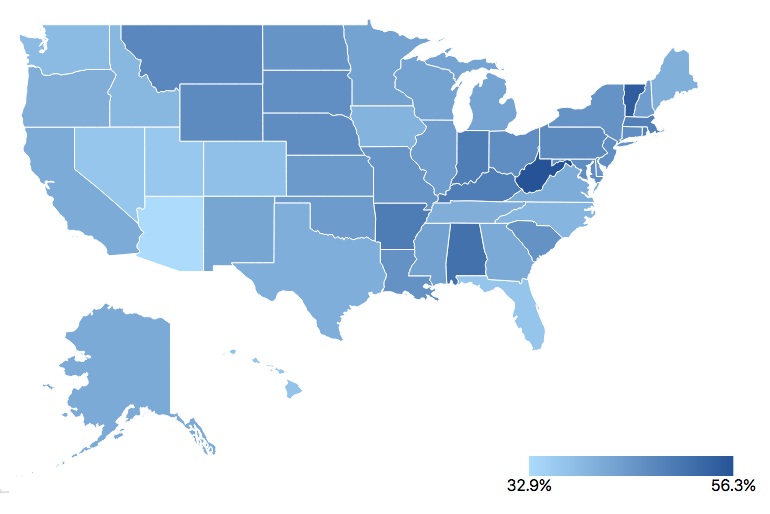 Statistically speaking, as an Ohioan, I should be working as an engine assembler in a factory rather than writing this article for you.

That’s the occupation with the highest concentration in my home state. The Midwest is known for production, especially automotive, so no huge surprise that engine assemblers are common.

Nothing against those mechanics, of course, but I think you and I are both glad that I ended up as an admissions consultant instead.

But what if we looked at another form of statewide data: the average acceptance rate based on a pre-med’s home state? What would we find, and what could we parse from the data?

WHICH STATES’ PRE-MEDS HAVE THE HIGHEST ACCEPTANCE RATES?

To be clear - this doesn’t represent your chances of getting into a medical school in that state.

It represents the average chance for an applicant from X state to get into any MD school. So, if you’re from Arizona (spoiler alert!), on average your chance of getting into an MD school is 29.3%, based on last cycle.

Hold your cursor over a state to see its average acceptance rate.

*Keep in mind this data is based on your state of legal residence during the time of your application.

Even though it’s fun to look at this data, it’s hard to draw a lot of solid conclusions from it. But here are some interesting questions that came to mind:

ARE ACCEPTANCE RATES HIGH IN STATES WITH MANY MEDICAL SCHOOLS AND A STRONG IN-STATE PREFERENCE?

In theory this would make sense - if your home state has a whole slough of schools that prefer in-state candidates, you’d have an advantage, right? New York has 14 MD schools and did pretty well for itself at 48.7%. I even had a family ask me one time whether moving to Texas would increase their son’s chances of getting in.

But this theory doesn’t seem to hold up. Texas boasts a whopping 11 medical schools (with a clear preference for in-state applicants), but it’s tied with Idaho for sixth last in acceptance rate, at 38.2%. Florida, with its seven MD schools and acceptance rate of 33.9%, would appear to be a similar example that debunks this idea.

If candidates come from underserved states, you could theorize that they’d carry more admissions weight as future doctors who could serve in these regions, or at the very least be accustomed to helping underserved patients in general (an attractive feature).

Wyoming supports this idea, with the third fewest physicians per 100,000 residents and a high acceptance rate of 52.4%.

But for every school that supports this idea, there’s one that challenges it. For example, Massachusetts was reported by the AAMC as having the most active physicians per 100,000 residents. So if you define ‘underserved’ by looking at provider shortages, Massachusetts is FAR from underserved. And yet it is one of the top five in acceptance rate.

Also, on a somewhat sad note, some of the states with the fewest physicians per resident, like Utah for example, ride the bottom five list in terms of acceptance rate.

WHICH REGIONS HAVE THE BEST ACCEPTANCE RATES?

﻿
Since the recession of 2007-09, there have been reports of demographic shifts towards the southern and western parts of the country.

This “Snow Belt-to-Sun Belt migration” has led to an increase of almost 1.4 million people in the South just between 2014-2015. The 13 states in the West grew by about 866,000 people in that same period. In comparison, population growth in the Northeast and the Midwest remained sluggish, growing by about 258,000 residents combined.

So, if everyone is moving southwest, then it would be easier to get into medical school in the Central and Northeast, right? Less competition for those coveted in-state spots?

Maybe. Like I said, it’s hard to make any definitive conclusions, so please don’t start immediately making plans to move up north out of desperation! With our recent polar vortex, you’d have to be pretty darn desperate.

What does this data mean to you? Any conclusions you can draw that we missed? Please comment below to add to this ongoing conversation.

Stats are fun, but they only tell part of the story. If they told the whole story, I’d be a machinist building engines somewhere in Ohio

As always, you should be aware of the data out there, but focus on what’s actually in your control: creating a stellar application that will increase your chances across the board.

Tagged:
getting in
what are my chances
homepage